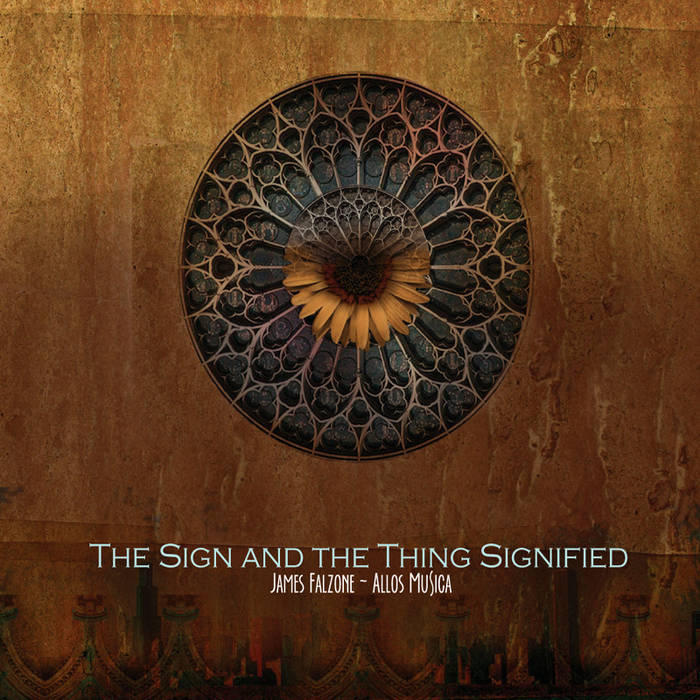 
LINER NOTES
I have been ever fascinated by semiotics, the study of symbols as they relate to human experience: language, stories, texts, films, faith, etc. How a “thing” can be interpreted as a “sign”, even when registered at the subconscious level, and can send a person down a whole thought path or way of acting.

An example: I was walking in my neighborhood and spotted a tree that had a leaf or two just beginning to turn from summer green to autumn gold. Seeing this sent me along a path of pondering the fall: certain foods I love to eat this time of year, certain clothes I wear only in fall before the really cold weather sets in, and the general sense of autumn ushering in the liturgical season of Advent, for me a time of intense faith renewal. These are all warm and positive thoughts and I found myself feeling light and full of hope even though my day had been filled with some particular frustrations. This whole thought flight, and the subsequent mood shift, was caused by what? A sign, the color of a leaf.

Music, of all the arts, is to me the one dabbling in symbolic meaning the most. What does a chord signify, really? Nothing. And yet everything when I hear and process it against other chords, in support of or in contrast to a melody, within the context of a larger work. And even more fascinating to me is improvised music which I think of as a kind of wrestling match with what one feels has significance. Navigating these significations is the task of both the ones making the music and the ones listening. And in the improvised moment, it all happens in an instant, in the twinkling of an eye.

Thus, The Sign and the Thing Signified. Much of this music was either conceived from the start or read back into after the creation, with symbolism in mind. Some of the more through composed pieces, Ten Months as example, have particular floating chords or quickly shifting textures, sculpted to represent a particular ten month period in my life. Other tracks, Cut, Tear, Curl or Jean Vel Jean, are completely improvised and it was only in retrospective listening that I thought through the signs, allowing my imagination to interpret the musical gestures of myself and my partners. Other pieces ebb and flow between the composed and the improvised mirroring, I hope, a sense of the perfections and imperfections of daily living.

At the same time, I was concerned about the pretense of all this and wanted to craft music which, if the listener had no idea nor care for my semiotic inclinations, could be enjoyed on other levels and could have layers of meaning assigned to it which I had never intended. I’m very comfortable with multiple meanings, multiplicity in life being partly what makes it worth living.


REVIEWS
"This is a genuinely unusual record, thoughtful and thought-provoking. The feel of the music is . . . autumnal, courtly and inter-temporal rather than of the moment or of the past."
~Duncan Heining, Jazzwise Magazine, Great Britain

The music is a mixture of chamber jazz and world jazz, with some avant-garde and classical thinking in the overall approach, and the result is a calm, warm and welcoming piece of intelligent and creative music . . . incredibly good . . . the music flows naturally, whether improvised or composed. Intelligent with subtle emotions. Great album!
~Stef Gijssels, FreeJazz.com

"As heard on the terrific new The Sign and the Thing Signified, this group led by clarinetist James Falzone is distinguished both by its mix of classically inspired, through-composed, and improvised material and by its instrumentation...Through impressive use of counterpoint and a knack for encouraging discrete interaction among the players, Falzone keeps the group's unusual assemblage of dry timbres from blending into a single astringent wash. Whether on an adaptation of a Purcell aria or a solo clarinet vignette, the music maintains a bracing clarity and sense of focus."
~Peter Margasak, Chicago Reader

"An intriguing mix of swinging chamber jazz, neo-classical structures, and folk music from around the world, Falzone blends an impressive array of influences into a singular style all his own. An engaging album that reveals new depths with repeated listens, The Sign and the Thing Signified is another rich document demonstrating the endless versatility and creativity of the Chicago creative improvised music scene."
~Troy Collins, Cadence Magazine

"...[Falzone] weaves music from threads of classical and jazz, and colors it with Middle Eastern filligree. His playing is technically unassailable, his deployment of a bassoon and three strings within his sextet impressively intricate, and the tripartite title piece summons some lovely textures."
~Bill Meyer, DownBeat

"Falzone is an articulate and interesting composer who utilizes the structure of classical music, the rhythms of Klezmer, the spark of polytonality and an abandon witnessed in free blowing to build a vibrant body . . . the effect is stunning."
~Jerry D'Souza, All About Jazz

"Falzone has written a very effective film score here. The music is that pictorial and atmospheric. The thing signified seems to be a dream of medieval Andallusia . . . a cd of highly perfumed and evocative music."
~John Chacona, JazzGram

"Since symbolism is a part of everyday life, and perception to some is more important than reality, there are those few who are able to translate the imagined into concrete. Clarinetist James Falzone and his improvising chamber sextet Allos Musica have taken symbols, whether real, imagined or conjured, and have made music that transcends category, moving it into a unique realm . . . a witty, piquant and eminently listenable Falzone extrapolates on past traditions made utterly modern . . . a consistently intriguing date from Falzone and friends, and comes highly recommended."
~Michael G. Nastos, All Music Guide

"This music sounds like an older form of chamber music and doesn't swing in a jazz sense yet remains consistently intriguing. What is special is that it is a treat to hear some new music that is closer to chamber music than anything else and still remains vital, crafty, and filled with surprises."
~Bruce Lee Gallanter, Downtown Music Gallery