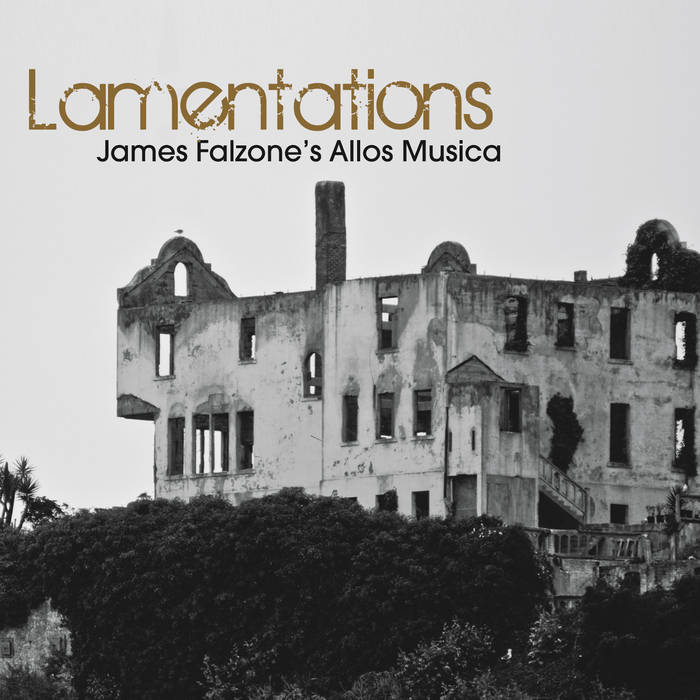 LINER NOTES
This music is intentional. Intended is what has been at the csore of my Allos Musica project since its inception: an ongoing dialogue (I might even use the word struggle) with my influences. Allos is a Greek word meaning “other” and so the project has always had in mind a reference to the otherly, the mysterious, the ambiguities that rest at the edges of my experience. Also at the core of Allos Musica is a revolving instrumentation. It is not so much a group as it is a concept and, therefore, the ensemble color changes as needed.

The Lamentations project started in 2006 as I prepared music for that year’s Umbrella Music Festival in Chicago. I had in mind to reference my fascination with Arabic forms, modes and aesthetics and to use a trio of oud, clarinet and hand drums. As a guidepost, I funneled my composing and conceptualizing through the lament, a musical/poetic genre that has transcended cultures and time. But could a lament be something other than mournful? Sometimes my own laments are hopeful, feisty, impatient . . . longing for change in a world I often do not understand.

This recording documents 7 lamentations, 9 improvised interludes, and a prelude and postlude. A few thoughts on each:

Raqs al-Janub (Dances of the South), was composed by my friend and teacher Issa Boulos, a remarkable oud player and composer who wrote this in response to two interactions he had with unsavory characters while riding buses, one in his native Palestine and one in a dangerous neighborhood of Chicago. Though on opposite ends of the globe, the two incidents reminded Issa of the “irony of the human condition.” A lament for sure.

Persistent, Time, Attente and Forward are all lamentations on time. Here are mediations on time’s relentlessness (Persistent), its mercuriality (Time), the complexities of stasis (Attente) and the tension of wanting to move time forward, an impossibility we have all experienced (Forward).

Arja'i Ya Alf Laila is a Muwashah of great beauty from the Andalusian period whose words possess a delightful ambiguity: Return to us, oh thousand and one nights, your twilight mist of perfume, so that your breeze quenches the longing thirst from the morning dew. My desires render my life abandoned,and your heavenly words are like a vineyard in the annals of time.Is the poet lamenting about a lover or a place? Is there a difference?

Ash Wednesday was the first lament conceived for this project and recorded previously with my group KLANG on our 2009 album Tea Music. The intention here is to capture something of the longing involved in sacrifice and denial.

A theme running through many of the laments and in the Prelude and Postlude is the shimmering timbre of bells and gongs, what Olivier Messiaen referred to as musique chatoyante, a glistening music, signifying the mystery of faith and truth beyond the temporal. Peppered throughout the recording are nine improvisations between clarinet and hand drums entitled The Thought and the Self. Here is Allos Musica at its most base; the intuitive confluence of influences and signposts that exists at the subconscious level, brought forth as only an improvised moment can do.

"Intense feeling and great beauty, filled with the sadness of reality yet flashing with the joy of returning hope in the end. Falzone is remarkable, as I've come to expect of him, but Malley's oud playing is a delight as well, notable in his solo on the last "Seventh Lament: Forward." Lamentations is a fine recording, with Falzone proving again he has much to say." ~Phillip McNally, Cadence

"Superb new album by clarinetist James Falzone and his Allos Musica project. Falzone got the idea for the record four years ago, after exploring the intersection of jazz improvisation and Arabic maqam for a commissioned piece. . . . he uses Arabic forms as a base for his expert improvisations, clearly referencing the beautiful hybrid developed by Tunisian oud player Anouar Brahem and Turkish clarinetist Barbaros Erköse. The album includes several beautiful original pieces by Falzone—he calls many of them "lamentations on time," and they meditate on its relentlessness, its mercuriality, or the restless human desire to speed it up. Though the Arabic influence is unmistakable, the music's emotional clarity and lyrical grace is universal."
~Peter Margasak, Chicago Reader Critic's Choice

"Their playing is absolutely excellent . . . because of its intimate quality, it is a great introduction for those not familiar with the music of the Middle-East."
~Stef Gijssels, Free Jazz