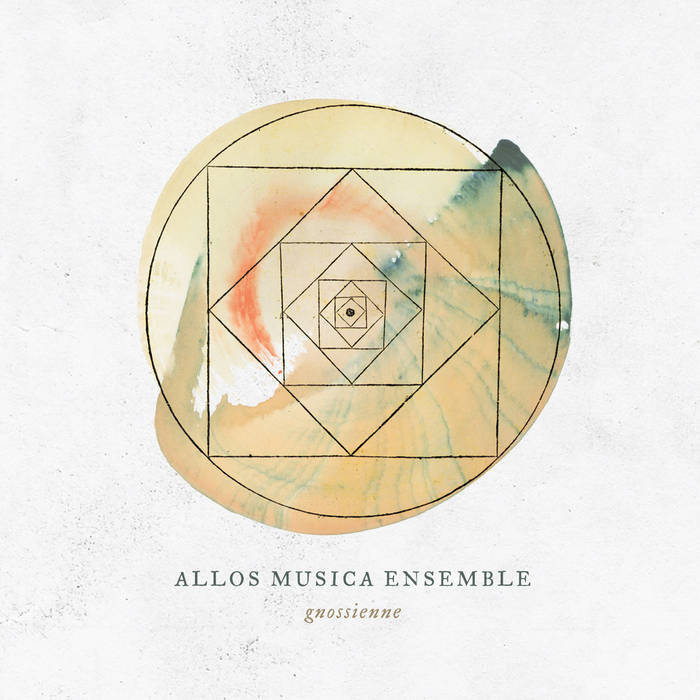 GNOSSIENNE
Allos means “otherly” and the ensemble which bears its name has always been a medium through which I synthesize and amalgamate seemingly disparate musical worlds. The group has been together, in one fashion or another, since 2000, but came into its present state in 2013 and is now, with this instrumentation and the incredible musicianship of Ronnie, Jeremiah, and Tim, the fullest realization of what I desire the group to be. Though I lead Allos Musica Ensemble, there is a collective spirit at work and the sounds you hear on Gnossienne were arrived at in the midst of performance, with improvisation at the center. Below I offer thoughts on the music of the album, as a bit of history and context, but never as a listening guide: you will hear only what you will hear.

GNOSSIENNE 1, 2, & 3
I have been fascinated by the music of Erik Satie for many years. He was a master of bending forms and of inviting the listener into a disorienting sonic world. His piano compositions known as Gnossiennes¬¬¬—there are 6 in all—offer an intriguing study of exoticism and delicacy. They also fit beautifully for Allos Musica Ensemble, the Middle Eastern scented modes landing perfectly on the oud and the undulating pulse of the original left hand of the piano working like a Parisian squeeze box once translated to the accordion. My arrangements keep things simple and true to the original though there is occasional added material and an improvisatory feel throughout. My hope is that the eccentric Satie, who was known to eat only white foods and collected thousands of umbrellas during his life, would smile at these arrangements and pronounce them “trés bon!”

ARJA’I YA ALF LAILA
This lovely song, known as a Muwashah, dates from the Andalusian period of Islamic history and is one of the oldest pieces in the Allos Music Ensemble repertoire. It was released on Lamentations (Allos Documents 005) in 2010 but I was compelled to offer a new take with the sound of the accordion now pulsing along. The beautiful lyrics, sung so powerfully here by Ronnie, offer us a return to a time when, like Al-Andalus itself, Muslims, Christians, and Jews lived in relative harmony, asking more often how they might be good neighbors than what ideologies might keep them apart. The poem reads:

Return to us, oh thousand and one nights, your twilight mist of perfume,
so that your breeze quenches the longing thirst from the morning dew.
My desires render my life abandoned,
and your heavenly words are like a vineyard in the annals of time.

A SHADOW FOR THOMAS MERTON
The American spiritual writer Thomas Merton looms large in my imagination. His essays and poetry, not to mention his classic autobiography The Seven Story Mountain, have shaped a great deal of my thinking. This composition is my attempt at the complexity of his thinking and the movement it has created in my own. It is also a classic Allos Musica approach, blending moments of West African polyrhythm with Breton-style dance with Satie-like melodic and harmonic shapes. The sentiment of a “shadow” in the title alludes to that which cannot quite capture the essence of something yet offers a possible abstracted substitute.

WISE ONE
Like Thomas Merton, John Coltrane looms large in my life. Released on his 1964 album Crescent, I may have first performed his composition Wise One as a high school student struggling to work out playing jazz on the clarinet. The clarity of the melody and Coltrane’s searching solo on the 2nd half of the recording compelled me that improvised music could be the carrier of great content and emotion. I was hooked. Arranging the piece for Allos Musica Ensemble, I added a section that uses the modality of the original while pulling it in a different direction, allowing Tim solo space on African talking drum, echoes of Elvin Jones in the air.

SUITE DE DANSES BRETAGNE
Jeremiah and I essentially met through playing music from Brittany, the far western region of France where Celtic heritage is heavily felt. Bretons speak a different language in that part of France, eat different foods, and their music has more in common with the jigs and reels of Ireland and Scotland than of Parisian chanson. This suite offers 4 distinct tunes and, in addition to lively interplay between Ronnie, Jeremiah and myself, features Tim playing bodhrán, the Irish frame drum. It is telling, and very much in the spirit of Allos Musica, how the modes of these ancient (likely medieval) dances reveal Middle Eastern influences when played on the oud.

MA’AYAN
Composed by my friend, Israeli guitarist and oud player Ro’i Raz, Ma’ayan, which means “spring of water,” is also one of the oldest pieces in the Allos Musica Ensemble repertoire. Ro’i’s melody, which I find myself humming often, is here given a reading that indulges its 5/8 meter and leans as much on the Balkan tradition as the Middle Eastern.

ILAHI
The full name of this enchanting song is Salât-ı Ümmiye. It is an Ilahi, a traditional Sufi hymn from Ottoman Turkey written by Buhurizade Mustafa Itri (1640-1712 AD), who composed the piece for the Mevlevi order, the same order as the beloved poet Rumi. Though the composer was Ottoman Turkish, the lyrics are in Arabic, the language of the Quran, and praise the prophet Muhammed who was thought to be illiterate prior to the revelation of the Quran. The poem reads:

Oh God, pray upon the prophet Muhammed, the once illiterate prophet
And upon his family (Abrahamic lineage) and apostles
Peace be upon them

In addition to Ronnie’s warm and captivating performance of the poem, I am playing a low whistle from Ireland, shape-shifting the instrument to resemble the Middle Eastern ney or Indian bansuri.

LAYAL BILA NAWM
The title of this lengthy original composition of mine translates to “nights without sleep.” While the music does not literally reflect my sleep patterns, it does mirror the ephemeral nature of my recent emotional life. The mixed meters present quite a performance challenge and each member of the group has a moment when their personality or color is asked to come to the foreground. A section in the final 3rd of the piece suggests a moment of stasis, when peace comes, at least in part. Layal Bila Nawm is dedicated to Stanley Wearden and Suzanne Blum Malley.

And so, in these ten selections, I believe you have the essence of Allos Musica. Much of this music is borne out of thinking: about culture and ideas and the sonic imprint of a place. In this way there is no better title for the album than Gnossienne, which seems to be a word Satie invented himself. At the root of the word is “gnosis”, the Greek noun for knowledge but there is also the connotation of spiritual insight, of learning about the mysteries of life through contemplation. Amen. It is my hope that the music of Allos Musica Ensemble delights the mind, the heart—perhaps the feet—and the soul.

ACKNOWLEDGEMNTS
My heartfelt thanks to Ronnie, Tim, and Jeremiah, for their incredible musicianship, humanism, and shared vision. Thanks to John Abbey for great work in the studio and scintillating political discussions while waiting for tracks to process. Further thanks to the production team of Dan Mohr, Scott Anthony, and the good folks at Groove House. Additional thanks to Jason Finkelman for hosting Allos Musica Ensemble at a fantastic residency at University of Illinois in November 2015 when much of this music materialized.