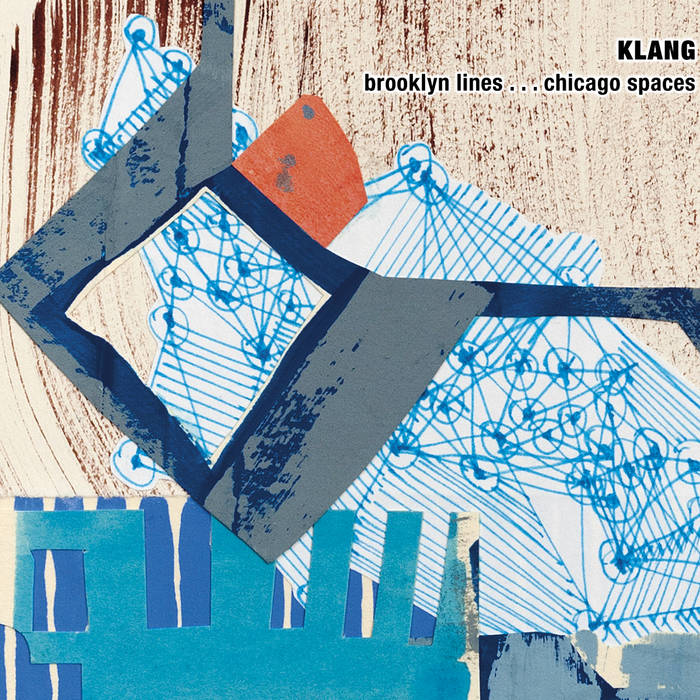 Mohan Thomas Inquisitive and urbane. Excellent complement of musicians. To me this music clearly isn't *trying* to be anything besides sincere. A fun listen!

LINER NOTES BY JOHN CORBETT
Every significant cultural production represents a complex intersection of storylines, a tangle of lineages. These crossing paths may start out relatively independent of one another, at least until they meet, at which point they become inextricably intertwined. In Buddhism, this is explained in the principles of dependent origination, which suggests that nothing comes from out of nowhere, and interdependency, which further insists on the relatedness of all things, their ultimate ontological reciprocity. Things are in a constant state of becoming, transforming, mutating, hybridizing. Existing lines meet; new possibilities are made manifest.

Maybe this is a heavy way to start the liner notes for such a lovely, ambitious, unpresumptuous CD as Brooklyn Lines . . . Chicago Spaces. Listening to KLANG, however, I am immediately taken with the way that various paths meet in the group’s approach, not just the two geographical locations of the title, but a whole host of stylistic and strategic storylines.

Two of those lines commence with Ornette Coleman in the late 1950s; Coleman’s approach, it should be said, did not originate independently, but extends another set of intersecting lines, from bebop and jump blues and nursery rhymes and birdsong. Let’s look at the lineages that emanate from Ornette. The first spools out via the John Carter groups; Carter took the freebop idea, expanded and elaborated on it, his clarinet solos presenting a whole new way of considering the instrument, and his complex, multi-part compositions hinting at fresh potential structures for improvisation. Out of Carter, we can locate part of the 1990s Chicago sound, the part primarily associated with Ken Vandermark, whose work picked up on some of those potential structures and instrumental approaches and further extended them.

Unfurl that line a little further, remaining in the Windy City, and you find James Falzone, a sensational clarinetist and a thoughtful composer with an effortless touch all his own. On Brooklyn Lines . . . Chicago Spaces, Falzone and crew develop a sound that they’ve been cultivating since 2006, over the course of three previous records, including two – Tea Music (2009) and Other Doors (2011) – on his Allos Documents label, a sound that can be plotted on that Three-C (Coleman-Carter-Chicago) storyline. Listen to “Ukrainian Village,” and you hear the condensed, compressed essence of this tradition, with a soaring, slightly swaggering melody, complex compositional twists and turns, open improvisation, and a deft bop undertow, courtesy of drummer Tim Daisy and bassist Jason Roebke, both youthful veterans of the ‘90s Chicago scene. The three-piece suite, “Alone at the Brain,” “Jazz Searching Self,” and “It Felt As If Time Had Stopped,” written in homage to one of the current scene’s great supporters, the critic (and most consistent patron of key Chi-town venue The Hungry Brain) Larry Kart, lends yet more weight to KLANG as a glorious part of this tradition.

Now, bear with me while I suggest that we can start another lineage back with Ornette, this time tracking out not through John Carter, but through Roscoe Mitchell. Quite a different conceptual trajectory here, not so much rooted in the postbop tradition (even though Mitchell’s early quartet was deeply dedicated to Ornette), but plunging into sound and space, the intricacies of sonority, little instruments, possibilities of non-swinging improvised music. Here I think we can immediately see some potential connections directly to Falzone, who is also an accomplished performer of contemporary classical music. Distilled in the two episodes of freely improvised “Chicago Spaces,” with Jason Adasiewicz’s bowed vibraphone, Roebke’s burping cracklebox, Daisy’s multi-directional metallics, and Falzone’s wide-open wood, the ghosts of the AACM and continental improvised music rendezvous with Olivier Messiaen and Pierre Henry, marking a beautiful, unheard station on the Coleman-Mitchell express.

But I think there’s another vital lineage that intersects with these two Ornette lines, one that starts with Jimmy Giuffre. The light swing of “Carol’s Burgers” nods at early Giuffre, but what insinuates itself throughout the disc is the commanding low-dynamic jazz sound that Giuffre pioneered on records with Paul Bley and Steve Swallow, and even more his even-tempered approach to the clarinet. Falzone shares that un-stressed proclivity; he rarely strays from the natural range of the horn, and when he does it’s never strangled or shrill. Like Ben Goldberg, he’s able to extract a full range of energies from the clarinet, moving only into altissimo on occasion, and when he does it’s still quite controlled. If this gives the proceedings a less explosive palette than other contemporary Chicagoans, it is also part of the specific quality of KLANG, an aspect of holding something in reserve. An aesthetic asset that signals their affinity with the Giuffre line.

Three lineages cross, bound together in this vibrant new statement from Falzone and KLANG. The group’s origination may be dependent on those storylines, but for that it’s not at all unoriginal. On the intricate theme and searching improvisations of the opening cut, the clarinetist’s unique insights as a player and composer are immediately evident. In the intimate interplay of the ensemble, perhaps we glimpse a further sense of the immanence of interdependency. Every human development, even innovation, originates in something else; everything in real time, even dissonance, expresses a relationship with others.

"James Falzone is such a terrific clarinetist, it would be easy to simply dwell on the sound he commands on the instrument. But when you listen to KLANG’s new album, Brooklyn Lines … Chicago Spaces, you don’t really focus on the clarinet. And as strong as Falzone’s partners in the group are, including the amazing vibraphonist Jason Adasiewicz, you don’t focus on their individual contributions, either. Falzone writes and plays in such a way that you’re engaged first and second by the larger imprint of the works, emotionally and aesthetically. As with visual art, the details reveal themselves slowly, and rewardingly. Falzone is as motivated by basic themes of beauty and strength and compassion as narrative events. The new album is full of disarming feeling, whether engaging in fetching swing or abstract improvised tones.
~ Lloyd Sachs, Jazzespress/WDCB Radio

"This isn’t music to make first-blush assumptions with.  That what sounds like modern jazz edging near the avant-garde/free improv border will do some surprising things that you should’ve expected in the first place . . . that Falzone may often sound on clarinet like he’s trying to elude a tail by perpetually doubling back, making sharp turns, and heading the wrong way into traffic, well, he is just as able to gently drift in space, like on the beautiful “It Felt As If Time Had Stopped.” Spend some time with this music.  This is music that intrigued me with my first visit, a little more with my second, and then after some time away, I find myself listening to it pretty frequently, my admiration and enjoyment increasing along with the time spent.  The music becomes more friendly the more one gets to know it.  Some music is like that."
~ Dave Sumner, Bird Is The Worm

"Tremendous record from this young group – a set that embraces a range of modern jazz traditions, then pushes them forward strongly to the next generation! The lineup here features some of the sharpest talents of the current Windy City underground – James Falzone on clarinet, Jason Adasiewicz on vibes, Jason Roebke on bass, and Tim Daisy on drums – all players who feel each others' strengths instantly, and find ways of coming together that are even greater than the sum of the already-strong parts! Falzone's clarinet is especially amazing – a fresh new voice on the instrument that pushes past even John Carter or Jimmy Giuffree – showing us that the instrument can really carve strong modern lines, when in the right hands. Adasiewicz's vibes are always a treat – and ring out beautifully – and both Roebke and Daisy have the right sort of freewheeling rhythms to set even more fire to the other two players" ~ Dusty Groove America

"As a group, they achieve a driving sound that is at the same time light and buoyant. Throughout the album, the melodies and counter melodies are imaginative and creative and the rhythm section ably supports and pushes the music forward. The more you listen, the more depth, crosscurrents and patterns you realize. It is deceptively seductive in this manner and quite easy to recommend highly." ~ Paul Acquaro, Free Jazz Collective Blog

"The blend of clarinet and vibraphone is what sets this quartet apart. That and Falzone’s bold yet still very jazz-like writing. Recommended" ~ François Couture

"A Chicago quartet of modern-jazz all-stars makes up this band, led by clarinetist Falzone. And while it's his stop-and-go, complex but catchy compositions that give the group its marching orders, Jason Adadiewicz's work on vibes threatens to steal the spotlight now and again: his work ranging from percussively prickly to being drenched in a dreamy, Twin Peaks-style excess of reverb. Odd-structured tunes like "Brooklyn Lines" dominate at first, but the gorgeous "It Felt As If Time Had Stopped" and the sprightly lyrical "Carol's Burgers" show that avant-energy isn't all this group offers.."
~ Seth Colter Walls, Rhapsody

"Falzone combines the Chicago spirit with the music and vibe he picked up in Brooklyn during a recent visit. The music is angular and bracing, reminding me of one of my favorite albums, Eric Dolphy’s Out to Lunch. The fresh and invigorating quality to the music comes from the sharp corners supplied by Adasiewicz and Daisy, that supply a percussive foundation for the bass and clarinet to bob and weave around in interesting ways. . . . a captivating performance as the energy waxes and wanes in a rewarding fashion."
~ Tim Nillans, Jazz and Blues BlogSpot

"Styles do not cross hairs as much as they are masterfully texture and kept intentionally distinct. “Carol’s Burgers” evokes ice-cool New York swing, while the eerie whimsy of “Alone At The Brain” exudes a chilling variation of peripatetic free-jazz. Falzone cements the arrangements with mind-blowing altissimo. The overall construction—brought together through the voicing of vibraphonist Jason Adasiewicz and the bop nuances of bassist Jason Roebke and drummer Tim Daisy—never falters against the rip currents of an approach reminiscent of Roscoe Mitchell or straight-shooting New York undertones."
~ Hilary Brown, DownBeat

"Although the instrumental make-up of the unit recalls the swing era clarinet and vibraphone combos popularized by Goodman and Lionel Hampton, Falzone’s four-piece actually belongs to an innovative clarinet-centric continuum that includes the introspective musings of Jimmy Giuffre and the avant-garde innovations of John Carter. Drawing on years of experience playing together, Falzone and Adasiewicz are a finely tuned front line. The leader’s serpentine phrasing boasts a dark, woody tone that courts dramatic dissonance without abandoning conventional harmony; his plangent lyricism is further underscored by Adasiewicz’s kaleidoscopic palette, which ranges from luminescent shadings to metallic shards. Roebke and Daisy provide able support, executing quicksilver shifts in mood with a combination of responsive timing, rhythmic versatility and timbral finesse."
~Troy Collins, Point of Departure